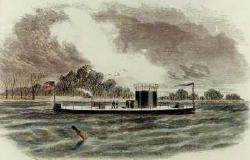 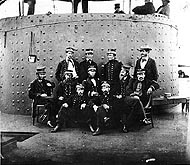 Wood for the U.S.S. Monitor
and other Civil War Equipment
Came from what is now known as
Johnson City, N.Y.


See Photos of the U.S.S. Monitor's Historical Marker in the Oakdale Mall.

The following is taken from * "Reminiscenses of Finch Hollow" by Arthur Crocker, born there in 1840, and written in the early 1900's. Mr. Crocker was a descendant of the pioneer Crocker family which came to this locality about 1794.

"Probably not three people in the town of Union know that the greater part of the oak timber going into the construction of the Monitor (which fought the Merrimac in Hampton Road) grew in this town, but such is the fact. James and Simon Bigler were heavy lumber dealers, having yards at Newburg and New York, and early in the Civil War they secured from the Government an unlimited order for first class oak and ash lumber cut to certain sizes. Their mill at Oakdale had by 1860 very nearly used up all the available pine timber, but there was still such oak and ash growing on the adjacent hills, and this contract with Uncle Sam enabled the Biglers to buy most of it for any reasonable price which might be asked. The Andrews boys, Allen, Miles and Alonzo, who had been employed for years by Bigler about their mill, scoured the country from the Chenango River to Nanticoke Creek and succeeded in bringing to this mill many thousand logs of the finest ash and oak, the sawed lumber from which was shipped at once to New York via the Erie Railway. All the product of this mill was loaded on the cars at Bigler's switch, located where now is Lewis H. Brown's coal yard. Most of this oak was used by the Government in building gun carriages -- the very best went to the ship yards. The ash was used in the manufacture of ramrods for cannons."

* In a school report, written by Vivian Haskins of Port Dickinson, N.Y., entitled, "The Local History of Johnson City and Surrounding Community" and dated Dec. 11, 1962, the following reference is made to Bigler's Steam Mill and the U.S.S. Monitor:

"Bigler's Steam Mill played an important part in the Civil War sea battle between the Monitor and the Merrimac, providing a large beam of white oak, sixty feet long to repair the Monitor for battle."

In her report, Vivian Haskins attached a copy of a newspaper article (no reference is shown as to what newspaper), undated (except for reference within the article itself, making the article as having appeared in 1941) and entitled:

An excerpt from this newspaper article states:

"In following the specifications of designer Ericsson, War Department officials conducted a country-wide search for the rugged white oak needed for the new ship's frame. One of the form queries sent out by the government to (unreadable) went to Simon Bigler of Oakdale, owner of the first steam sawmill in this section of New York State, on what is now the corner of Reynolds Avenue and Oakdale Road.

Bigler's mill employed a considerable crew of hands and was the center of close to 100 acre of the best white oak, pine and hickory in the east.

Simon Bigler was awarded the government contract for a solid piece of white oak 60 feet long. Simon Bigler and his men knew that their country needed this timber. So they proceeded to supply it, with no "static" and no "bottlenecks."

A special truck was built to transport the huge beam from the mill to the canal, which is now State Street in Binghamton and it was loaded on the canal boat and started it's journey to Camps shipyard in New York. Alex Carmen, mill employee who accompanied it, later became a prominent Binghamton contractor and builder of the Waldron Block on Court Street. He died last year at the age of 95."

(Note: Bigler's Steam Mill was located at what is now the Oakdale Mall in Johnson City, N.Y.)

* Thanks to Janet Ottman, "Your Home Library" Librarian and Johnson City, N.Y. historian, for providing this information.