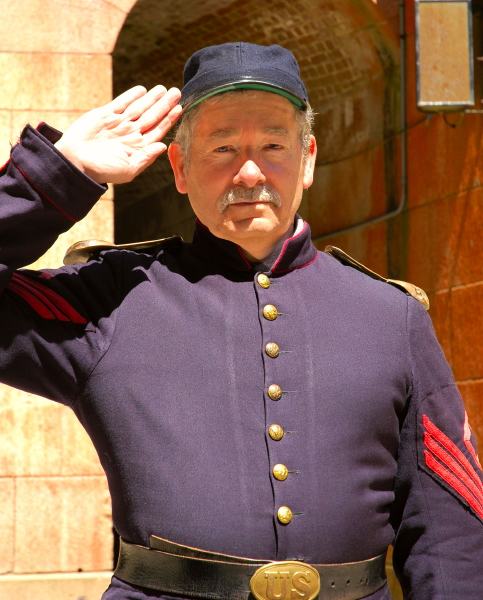 1) The Army decided to build the fort because the British and Russian empires still had a presence on the American west coast, and the fort was to show American sovereignty.

2) Like most seacoast fortifications at the time the fort was built low to the water so cannonballs could be skipped on the surface and hit ships at water level.

3) Ft. Point is the sister fort to Fort Sumter - same basic design - and the only brick fort west of the Mississippi.

4) There were undoubtedly some New Yorkers in the first contingent of cannoneers (3rd artillery, Company B) from the east coast, because there were no trained artillery men among the California regulars. In fact many of the latter were in Nevada protecting the telegraph lines and stagecoaches from Indian attacks.

5) About a third of people in the Bay Area at that time were from the south, so the cannons at first were aimed at San Francisco because of the threat of a land invasion. But San Francisco showed its loyalty to the Union by mass rallies at what is now called Union Square, so the cannons were turned to the sea to face the enemy that never came.

6) California was very important to the Union war effort because:
- gold was still coming out of the mines, and it was a major infusion into the Union economy.
- Californians were the major donors to the Sanitary Commission, which ran the main and field hospitals during the war.
- California Volunteers relieved the Army regulars who were stationed in western forts so the regulars could be sent back east.
- the "California Battalion" were enlisted men from the state who served with the 2nd Massachusetts Cavalry and who fought against Jeb Stuart's and Jubal Early's cavalry.

7) Some Confederate sympathizers outfitted a privateer and were going to attack the ships carying gold, with the idea of taking it to the Confederacy instead. But the night before they were to leave some of the crew went to a bar and after a few drinks too many told everyone what they were planning to do. The next morning a Navy guboat was waiting for them at the Golden Gate and the crew became the first civilian guests at the military prison on Alcatraz.

If you are planning a trip to San Francisco, or just wish additional information on Fort Point, please feel free to contact me at penbrush@earthlink.net and I'll be happy to make arrangements to meet you at the fort, or answer your questions. In addition, I'm hoping to do some volunteer work this summer at Alcatraz, which originally was a Civil War Military Prison, and if you would like information on Alcatraz, also feel free to Contact Me.