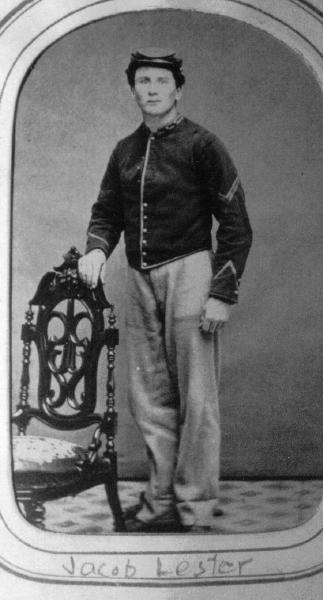 Jacob Lester was the last surviving Civil War Veteran in Broome County, N.Y. Mr. Lester passed away four days after his 100th birthday, at his home at 12 Newton Street in the Village of Port Dickinson. He is buried in the Chenango Valley Cemetery located on Nolan Road, Hillcrest, Town of Fenton, N.Y. View his Headstone.

This newspaper article appeared on his 100th birthday.

This newspaper article appeared four days later on the day he passed away.

From the N.Y.S. Military Archives

The following is taken from New York in the War of the Rebellion, 3rd ed. Frederick Phisterer. Albany: J. B. Lyon Company, 1912.


* Dyer's "Compendium of the War of the Rebellion."

Regiment lost during service 4 Officers and 56 Enlisted men killed and mortally wounded and 1 Officer and 89 Enlisted men by disease, etc. Total 150.
* Written & complied by Frederick Dyer. After the war, the Department of the Army assembled some of its vast information on the War and published the multi-volume work entitled the "Official Records of the War of the Rebellion." However, the Official Records were not fully indexed and were therefore not easily usable. Dyer used information from this source and from Union veterans to complete his work. After five years of almost solitary confinement, Dyer completed his task which was published under the name of the "Compendium of the War of the Rebellion."