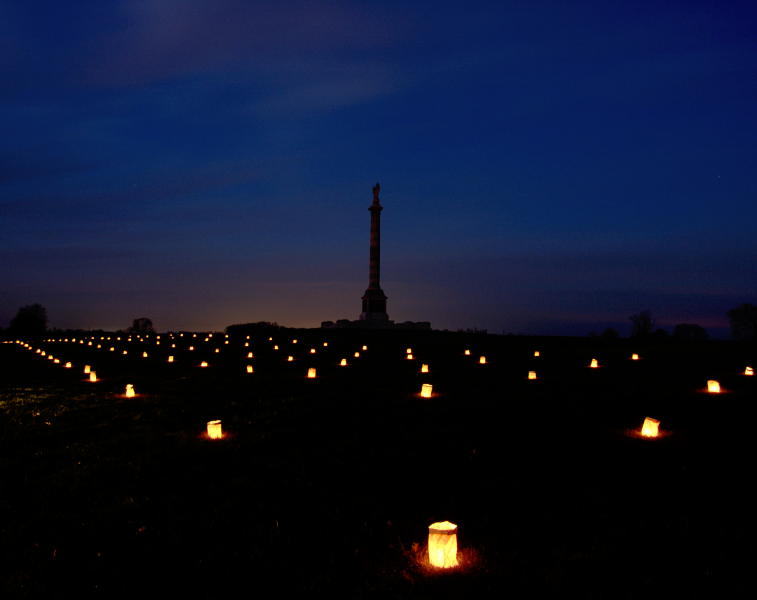 The Annual Memorial Illumination of the Antietam National Battlefield was held on Saturday, Dec. 4th, 2004. Over a thousand volunteers, working in teams, place over 23,000 luminaries over much of the battlefield in memory of a like number of men lost during that one day of battle on Sep. 17, 1862.

The volunteers started early in the morning of Dec. 4th placing the luminaries (candles in sand weighted paper bags) out on the battlefield. They work in teams and each team has a section or number of sections of the battlefield to take care of. Teams seemed to be using string or rope to align the luminaries, and I overheard that at least one team was using lasers to align the luminaries (however, I didn't come across any 'laser guided teams' during my tour around the battlefield to observe and take photos). On the following photo pages you will see teams in action with the lines. You will also notice in the photos of the glowing luminaries at dusk and after dark that some lines do not seem to be straight. Let me assure you all lines were straight ... the rolling contour of the land is what gives the illusion in some photos of crooked luminary lines. In the afternoon teams then light the luminaries and they stay lit through the early morning hours. The park is closed around 3 P.M. and vehicles start lining up to enter a designated route through the park which opens at 6 P.M. The traffic winds through the battlefield was almost bumper to bumper and the roads were heavy with traffic heading towards the entry point.

Through the assistance of Antietam National Battlefield Superintendent John W. Howard, I was able to obtain a photo pass issued by the N.P.S. which allowed me access to the high grounds around the Visitor's Center, a good vantage point for taking photographs. The photographs on the following pages are divided up about half showing teams working during the morning, and shots of the illuminated battlefield at sunset and after dark.

If you have never been to the Antietam Memorial Illumination, make plans to go this year (see their Website for more info). Weather permitting, it's held the 1st Saturday in December each year. This year's event will be held on Saturday, December 2, 2006. In the event of poor weather, the Illumination will be rescheduled for Saturday, December 9, 2006. It is simply awesome!